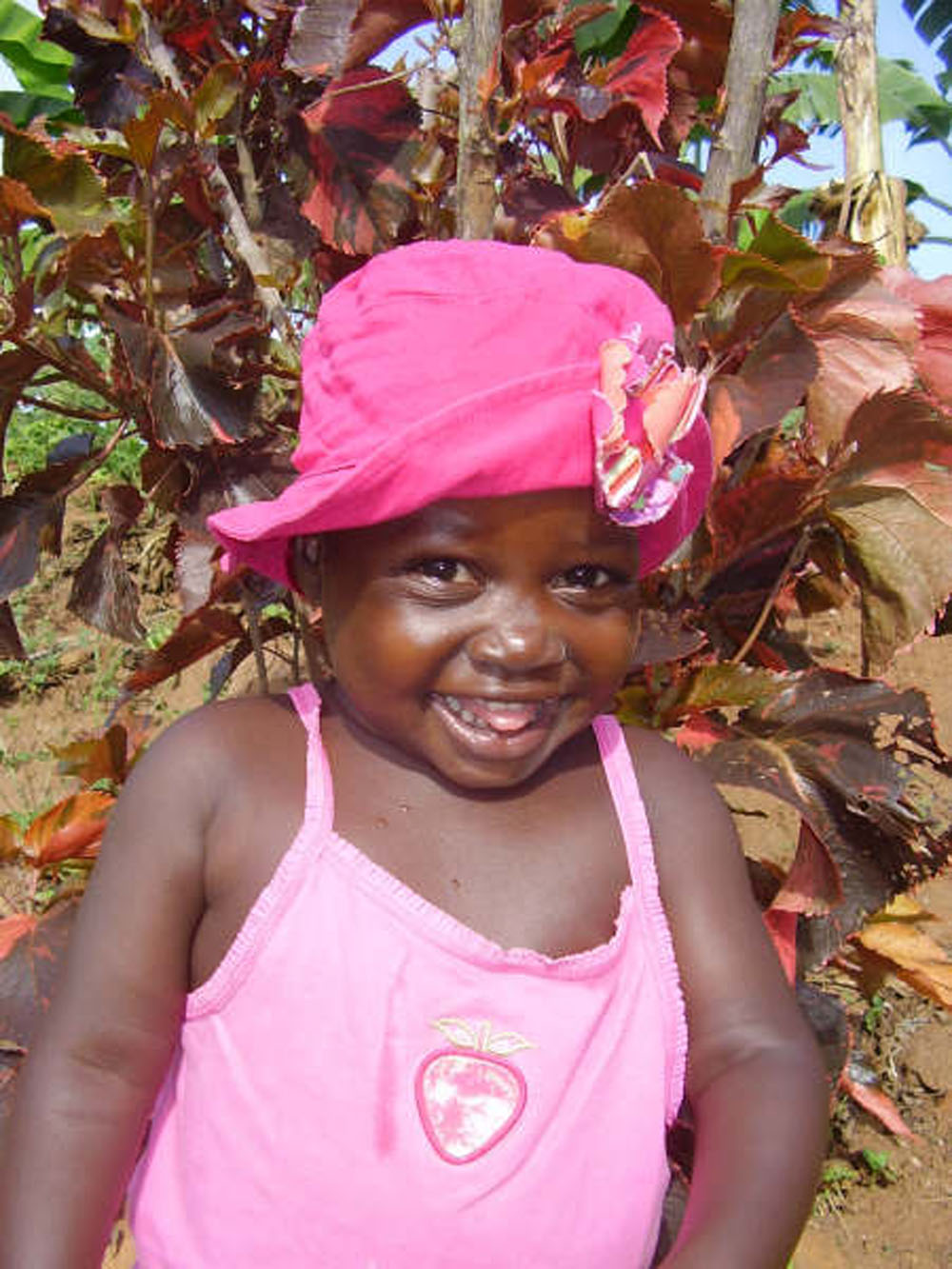 Yes, there we are again…
I saw that my last report was written almost 2 months ago so it is high time for an update on Kim’s adventures in Uganda…….

A lot has happened recently so I will try to shorten it a bit otherwise this will be a very long report. I hope everyone has received my mail and I would like to thank everyone for all the sweet Christmas cards and great donations so that I can at least continue here…..

Finally we are registered in Uganda!
The organisation HULP (help, understanding, learning and progress) is finally official in Uganda after bribing several people to speed up the process ( yes yes it took 7 months). Now it’s big work, raising funds and registering in the Netherlands so that we also become (super) well known there. There is a website in the making and for the rest everything is still polla empolla (slowly).

Christmas was nice and summery. We had bought some presents for each other and cooked a nice meal. Nice and quiet without (obligatory) family visits and at the end of the day we went up the hill to play and drink lemonade. We spent half the morning with the Vogel family on the phone and read poems so that I could still be there (thank you!) New Year’s Eve was rather (carefully expressed) boring. We had invited Rosah’s grandmother with some children. The poor darlings are used to go to bed at 9 o’clock so when the film stopped at a quarter to twelve they were demolished and went to bed. I wonder if they understood that at noon the new year started. In short, a quiet and peaceful turn of the year with my thoughts with all the wonderful people who support me….

After a few days I went to Kampala to get information about an operation for Frank (burned by his father for stealing coffee beans). He needs plastic surgery but last time we visited the doctor we ended up in a fight with Frank. It was clear he wasn’t ready yet. After a lot of explaining and talking we got him to visit the doctor again. On Monday we went to the hospital and there we got the news that he could be operated on Thursday… Super of course, but the whole family had to move to Kampala and stay in a hotel for three weeks until Frank could go home.
The hospital where Frank was operated on is great. The operation was free of charge and because of that a lot of children and adults can be helped. Polio, harelips, children who have never walked before and can walk again after the operation (and months of rehabilitation), you can’t call it that crazy or they can operate. The operation went fine, they cut some tendons so he can stretch his fingers and arm completely again and they removed some skin from his thigh to neatly stick it back on the arm.
After three weeks and tired of living in a hotel we were finally allowed to go home. Lovely back to the village and the peace and quiet. Meanwhile Frank is going to school again and the wounds are healing well. Back in a week to see what the doctor thinks of it. Of course Frank remains a vice and doesn’t find it very interesting to do exercises one hour a day, he prefers to play soccer…….

Babirye grows like crazy and has a lot of talk (in English and Ugandan. The potty is a real hype and she likes to put a pee or poop on it. This lady also has her drama moods and she would make a great actress. All day long we sing and dance and a hundred times a day I hear “Mama want…..(water, milk, food)”.
She is very sweet to Rosah but also a bit jealous. Talking about Rosah, how wonderful it is when a child sleeps during the night. Finally she understands that the nights are for sleeping and not for screaming. Because I am getting more rest now I am much less stressed and have no more desperate crying fits. Rosah is now almost 6 months old and laughs all day long. We regularly go to her grandmother who is always happy to see us and makes us some delicious tea and then shower us with a nice meal. I think it’s important that Rosah has contact with her family, at least she has a family member who cares about her and we should cherish that. The others don’t have anyone who cares about them, which I find pathetic. So Rosah’s grandmother is the grandmother for everyone in our house and she loves it.

I plunged into the Ugandan nightlife one night. A carpeted dance floor and alcoholic drinks for a eurie. As I can hardly find a (tasty) wine here I had to visit the bar before I could show my skills on the dance floor. After two Smirnoff’s I was pretty tired and had the guts to dance between the Ugandan ladies and their sometimes just too tight miniskirts and men with a beer belly and just too tight jumpers (with sunglasses). As a Mazungoe I got a lot of male attention (always nice) but not a suitable candidate, I already have a boyfriend. While the reggae music was pouring out of the boxes I was having a great time seeing all these people dressed up for an evening of dancing. Couples who danced very intimate, old Mazunggo men who went off with 20 year old Ugandan girls and then paid some money for a nice evening so the girls could pay their school fees again and especially the poor souls who were dancing with themselves in the Mirror. A couple stood in the mirror all evening to see if they could dance well together (really great to see) a rastaman showed his dancing qualities to himself in the mirror and didn’t need anything else to entertain him. After my third drink my light went out… so back on the moped and early the next morning on……

Everything is going according to plan here…. school has started that means that the alarm clock is at 6 o’clock to wake up the boys. Cleaning the house, doing the dishes, washing the babies and cooking. Luckily I have Maureen to help me. With every free minute we have we try to set up our necklaces ( yes yes very nice) business. We make necklaces here that I send to the Netherlands and sell there. The proceeds will be used for the organisation (so….OPEN!!!) Every day I go to school to show off my wonderful sister qualities. No wound too bad for me and I now have half a pharmacy in the house so medicine for every pain. The kids love to get that attention ( and kiss after treatment) so they walk with the most little scratches that I of course lovingly clean and put on a nice plaster afterwards. Around 5 o’clock everyone comes home so rush hour….. soccer, playing, colouring, doing homework, scraping, talking and of course eating. Yes then it’s already 9 o’clock and I have to brush my teeth and go to bed and I am happy when Rosah closes her eyes around 11 o’clock and I can go to bed as well.
It is quite difficult to keep everything under control. The boys are naughty and have done a lot of naughty things the last few days. For me it is difficult to find a suitable punishment because I have understood that talking doesn’t always help and that in the end they don’t take me seriously and don’t respect me anymore. In short I am the boss in the house and I need to be listened to…..( yes yes easier said than done).

Once again the family has been extended…..
Rosias is his name and he came up with an excellent (pathetic) story to melt our hearts and to give him a chance to live with us. We have now found out that nothing of the story was true (story: Mum dead, dad dead, stepmum a bitch left the boy alone in the house for a month, in the end all the roof tiles were stolen and the sweetheart didn’t know what to do anymore. The real story is that Daddy lives with the stepmother (really a bitch) but these people abuse the baby and don’t hesitate to even kill him (don’t ask me why). When we researched this story (Miss Marple on the road between the banana trees and over dusty roads) it turned out that this child needs help (HULP) because the stepmother even threatened to kill him when we were there….. The real mother also lives but is unable to take care of the child. After a big sermon and a lot of regrets we decided to take Rosias into our (fast growing) family.

Unfortunately, I also once had to say ‘no’ to a child… Well, not so much to the child as to the police. A baby had been found near my house. The mother had left the 6 days old baby in “the swamp” (a sort of ditch made of very dirty water) on Christmas Eve. By the time people found her, the eyes had already been eaten by insects but the child was alive. The poor little one was discharged to the nearest hospital and left there for the sisters who took care of her. Of course I took a look in that cot but believe me I am not at all ready to have another screaming in my house and the prospect of another 4 months of sleepless nights already makes me tired…… I thanked you for this offer. Luckily the grandmother showed up after a few weeks and offered to take care of the treasure…end well already….

Yes I think that was it again…… here are some more messages that are told over the radio. The radio is the medium here to convey all the good and very bad news. I am sometimes amazed at what people do to each other here and sometimes have the feeling that living here is not worth anything….

News from 8 a.m…….
5 underage boys have broken into the house of a middle-aged woman….
After stealing all her money and possessions they raped her one by one…as if that wasn’t enough they killed her and chopped her up.
It’s unbelievable, isn’t it? In Kenya they slaughter each other because of a political issue and if we are not careful we can be ambushed here and they will kill you for less than a tenner. That is why we now have a real security guard in house…. We call him afende, a retired policeman who fought in the bush for Museveni. He looks like 90 years old and uses his bow and arrow (yes really) and his mega knife to keep us safe. The children love him and I believe I can trust him (after my previous security guard who let the boys drink alcohol and told them that he would rape the ladies in my house for a while and leave Maureen in awe…..). In short it is going on here and I think we are a kind of happy family. Enough kids for now… First we have to get administration and financial matters in order, because that’s important.

Eventually the report ( of course) became longer but now you are a bit up to date again. Treasures for all of you a big kiss from Uganda and for those without holiday plans…..There is plenty of room here! 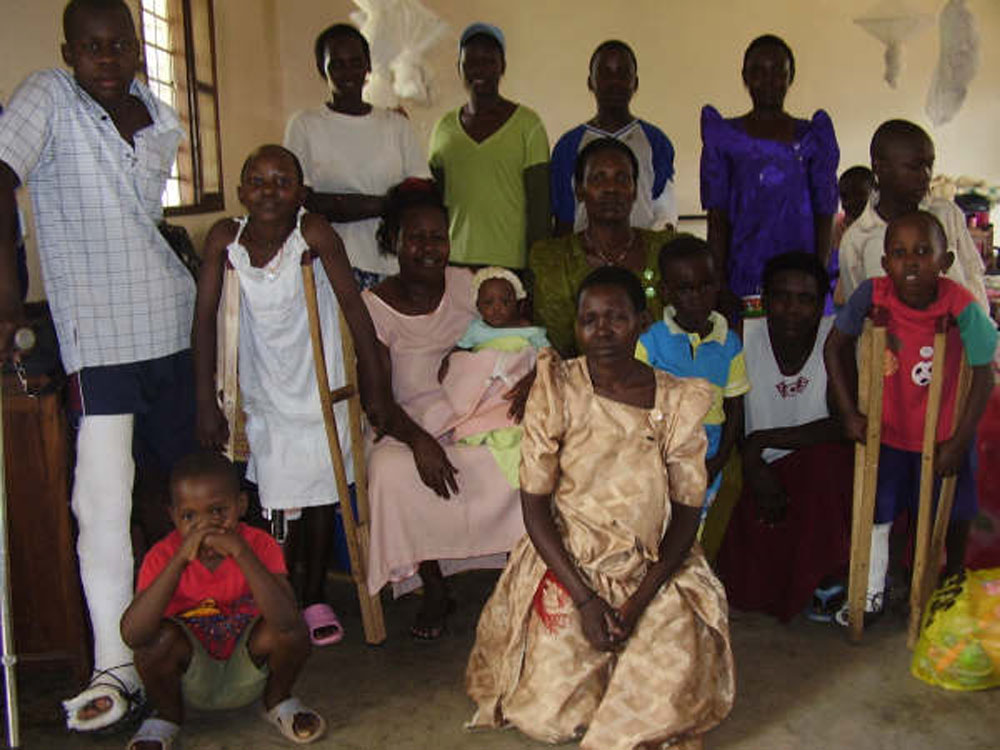 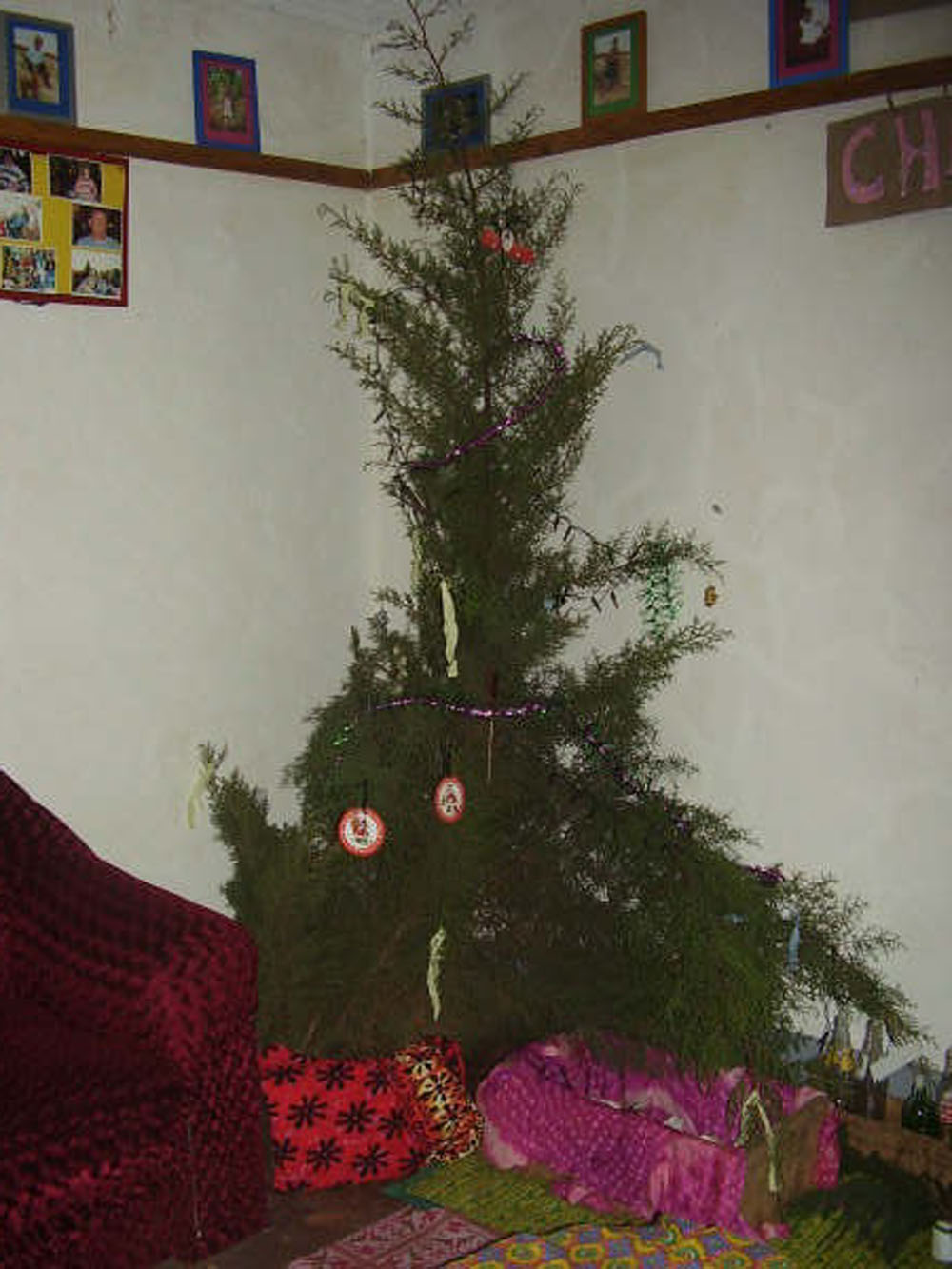 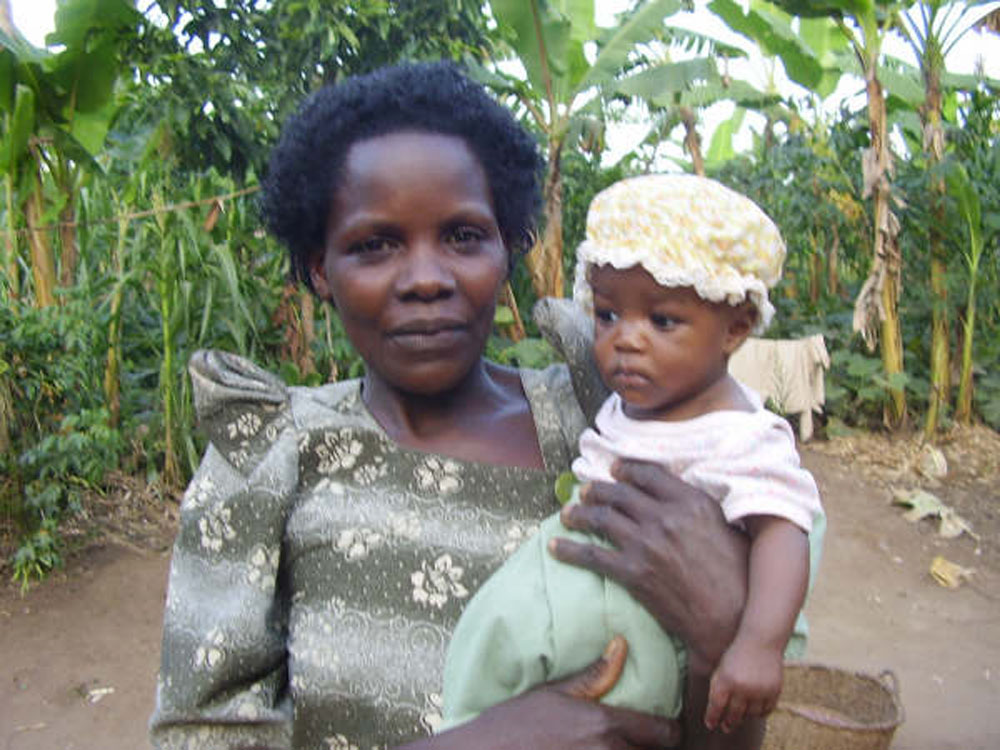 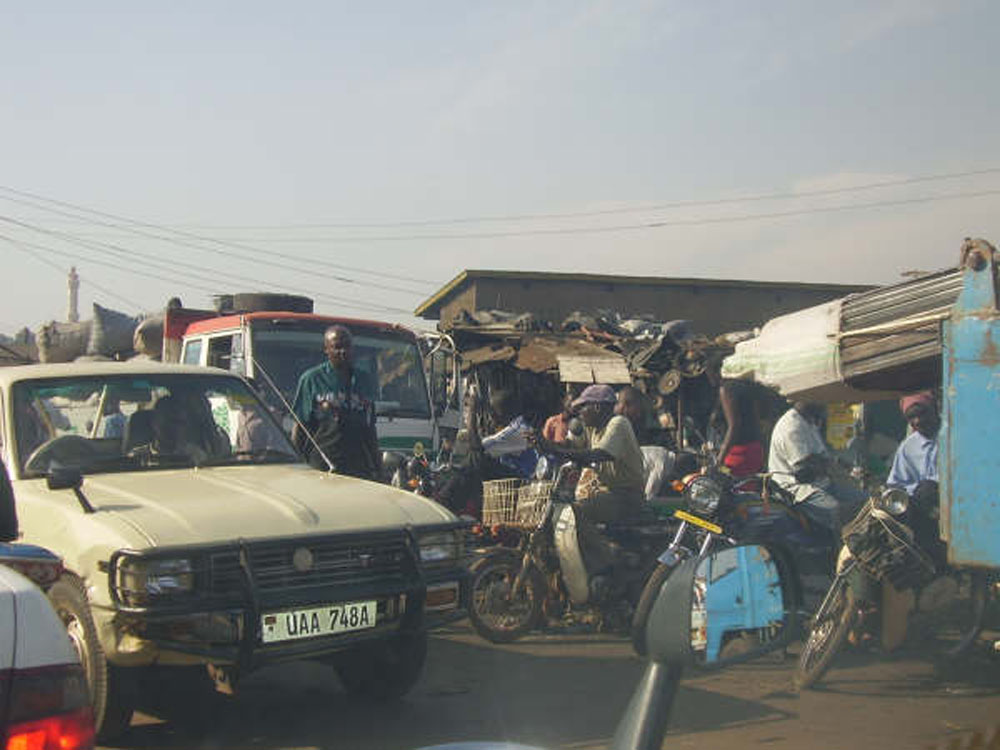 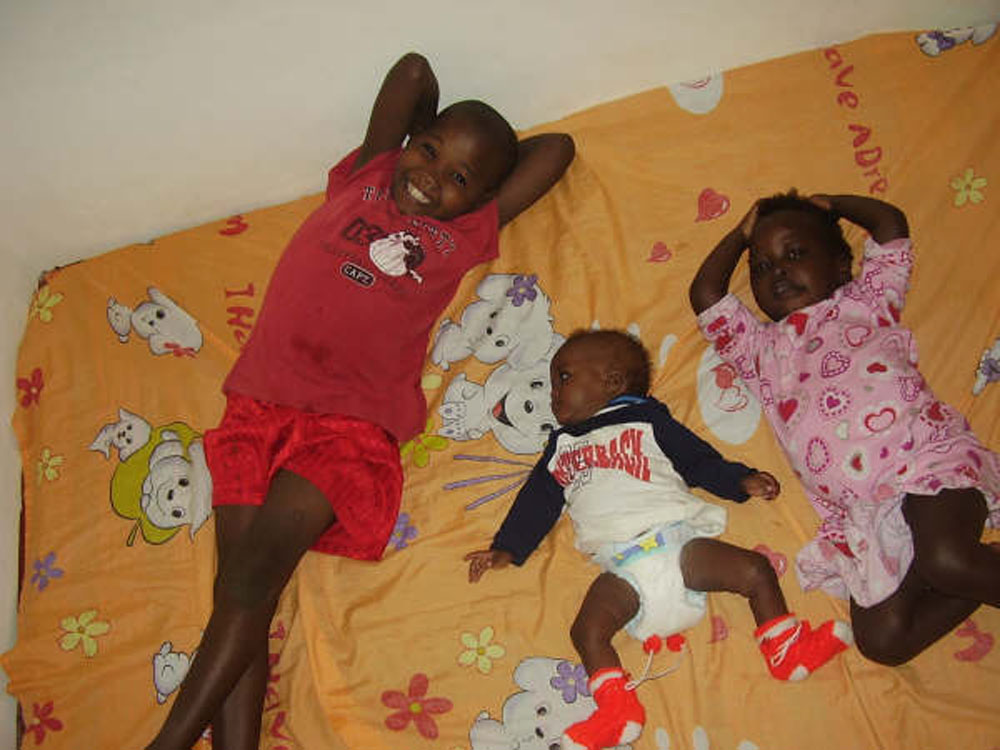 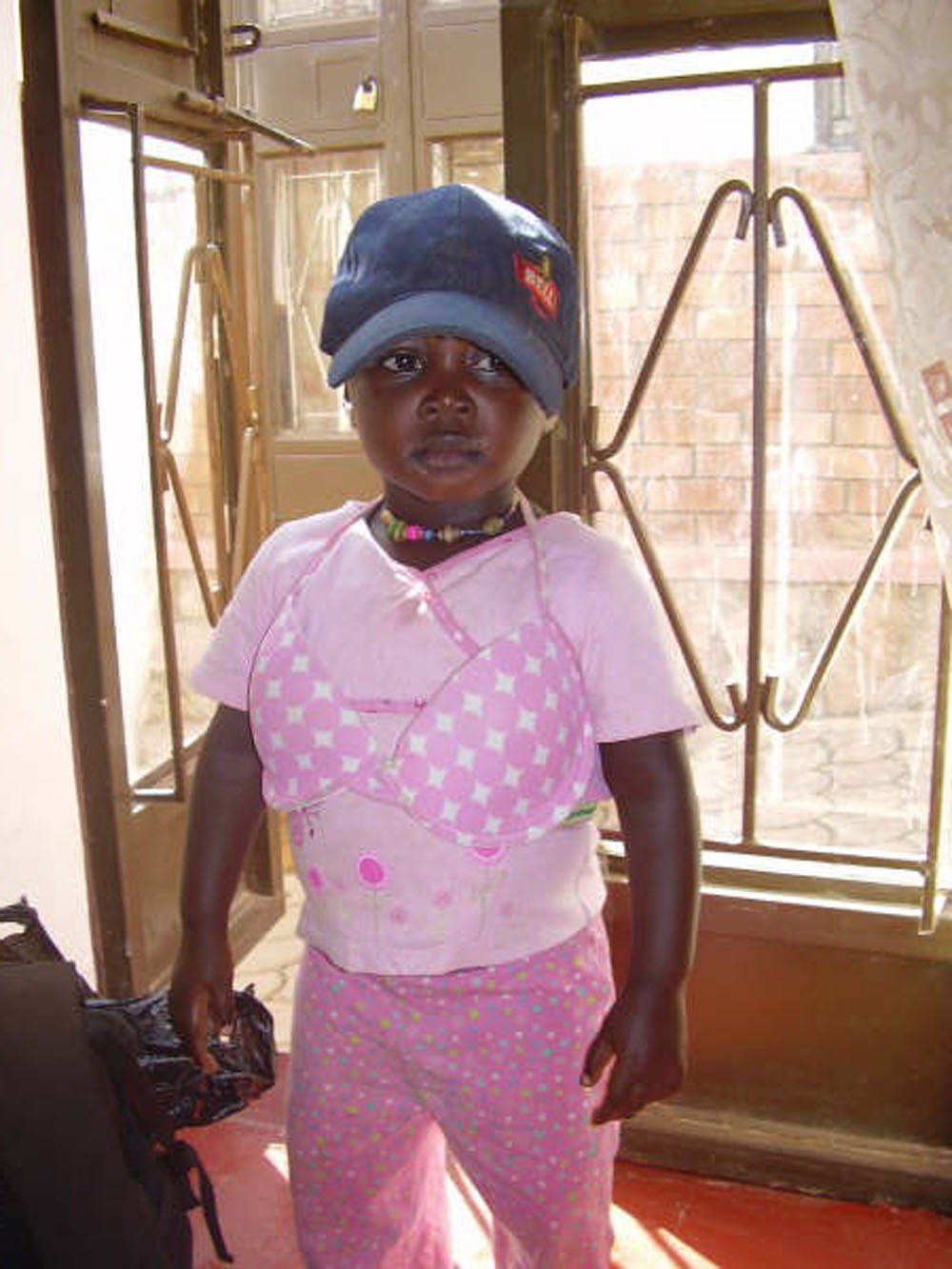 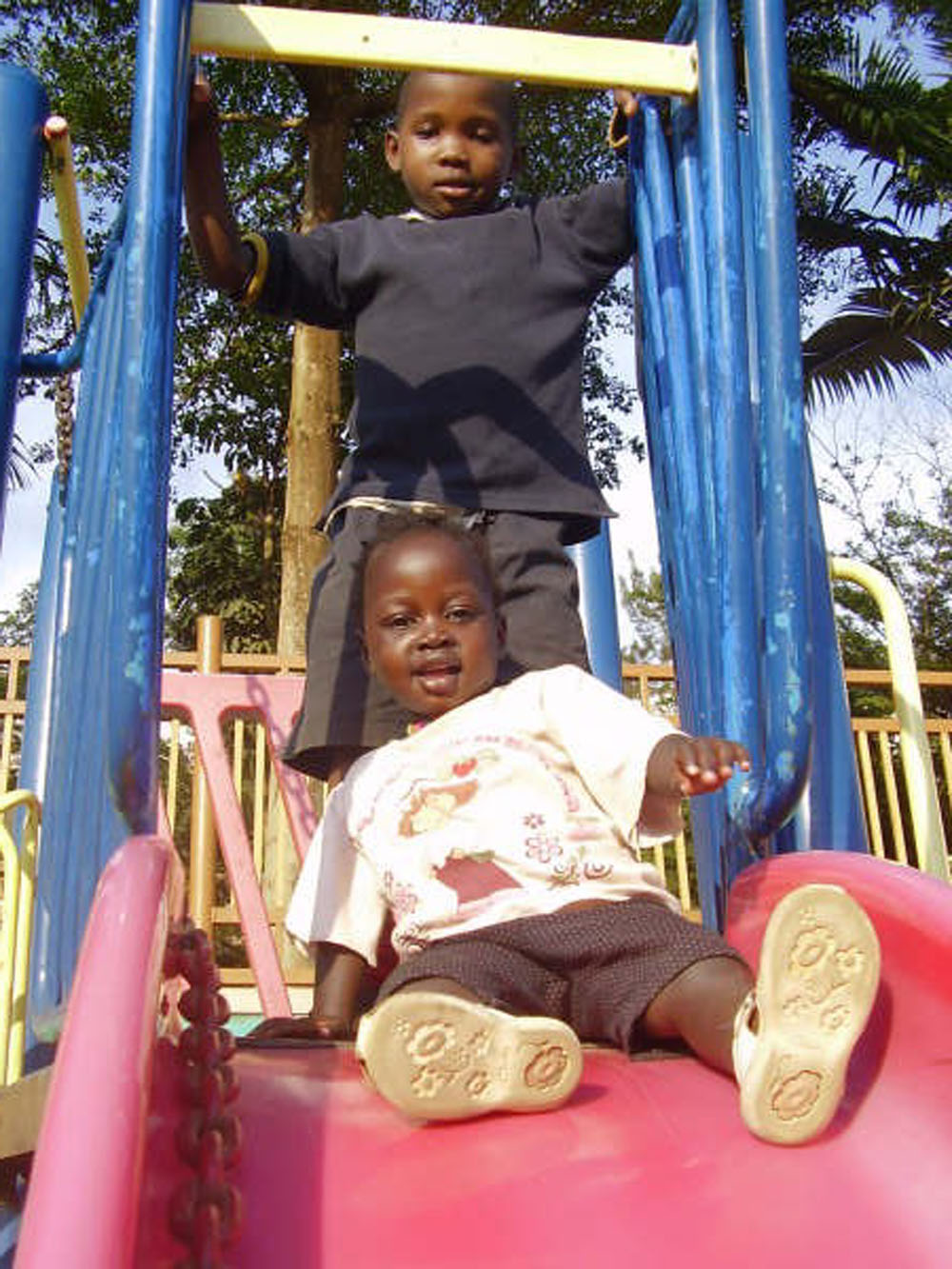 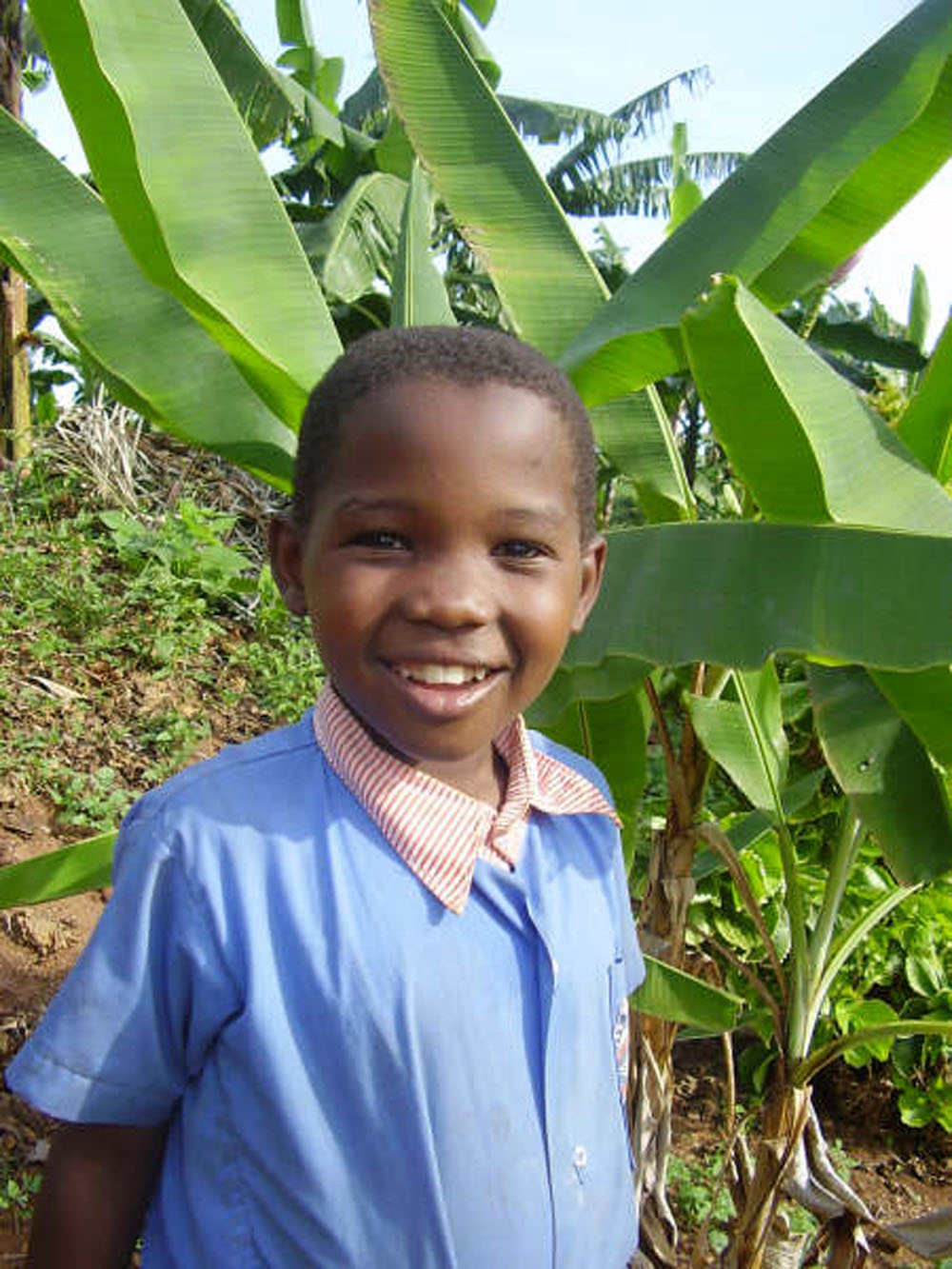 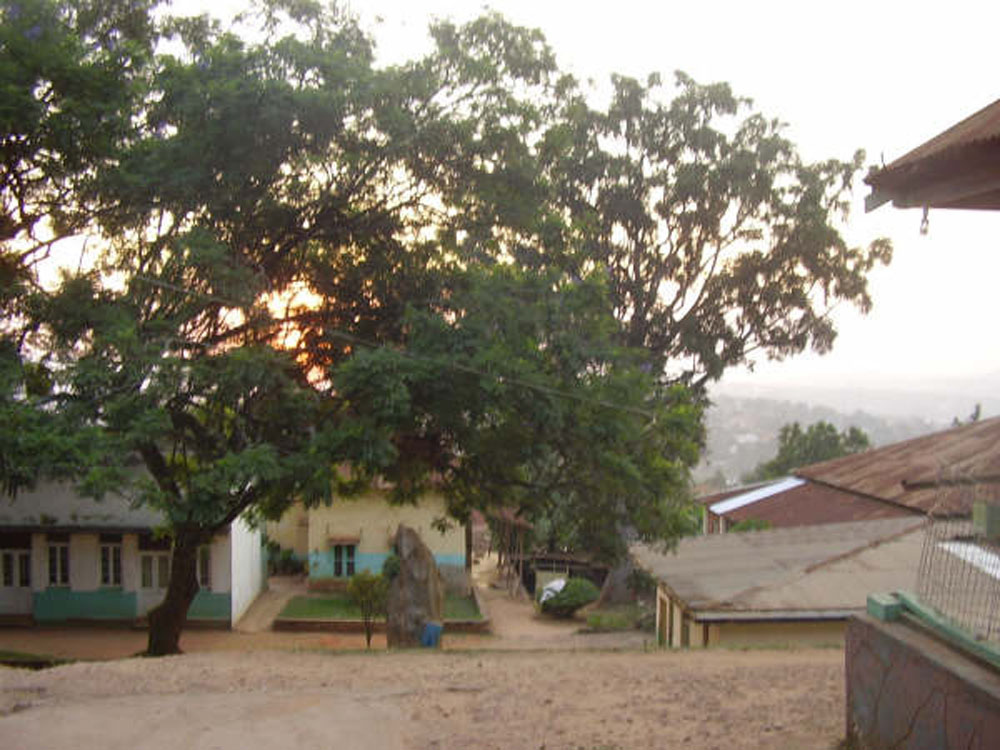 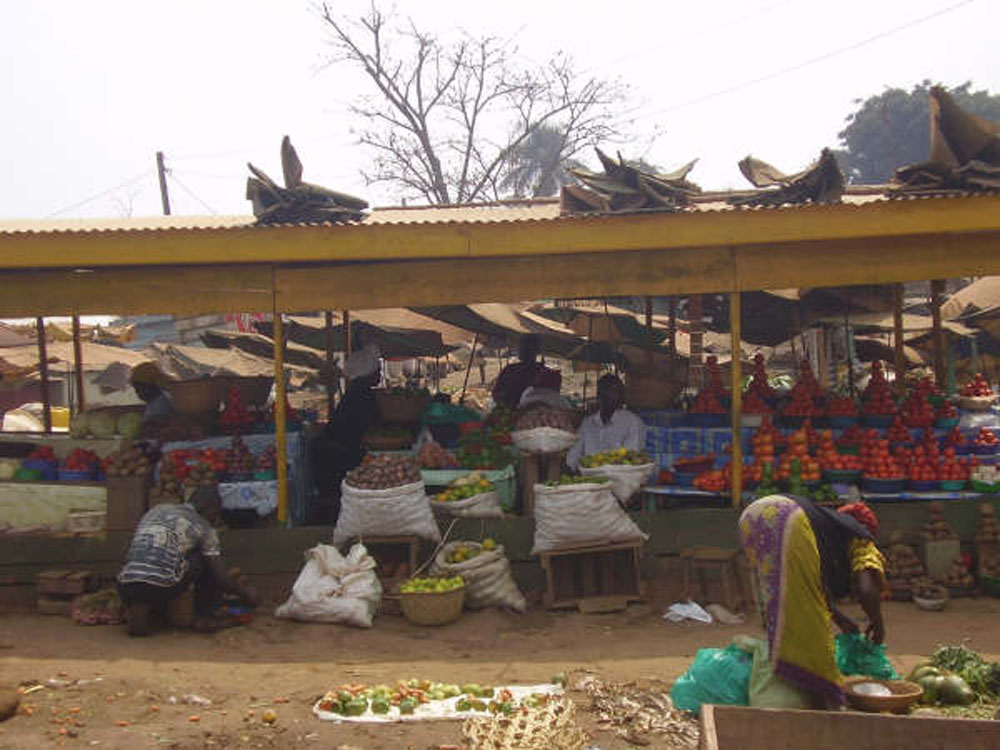 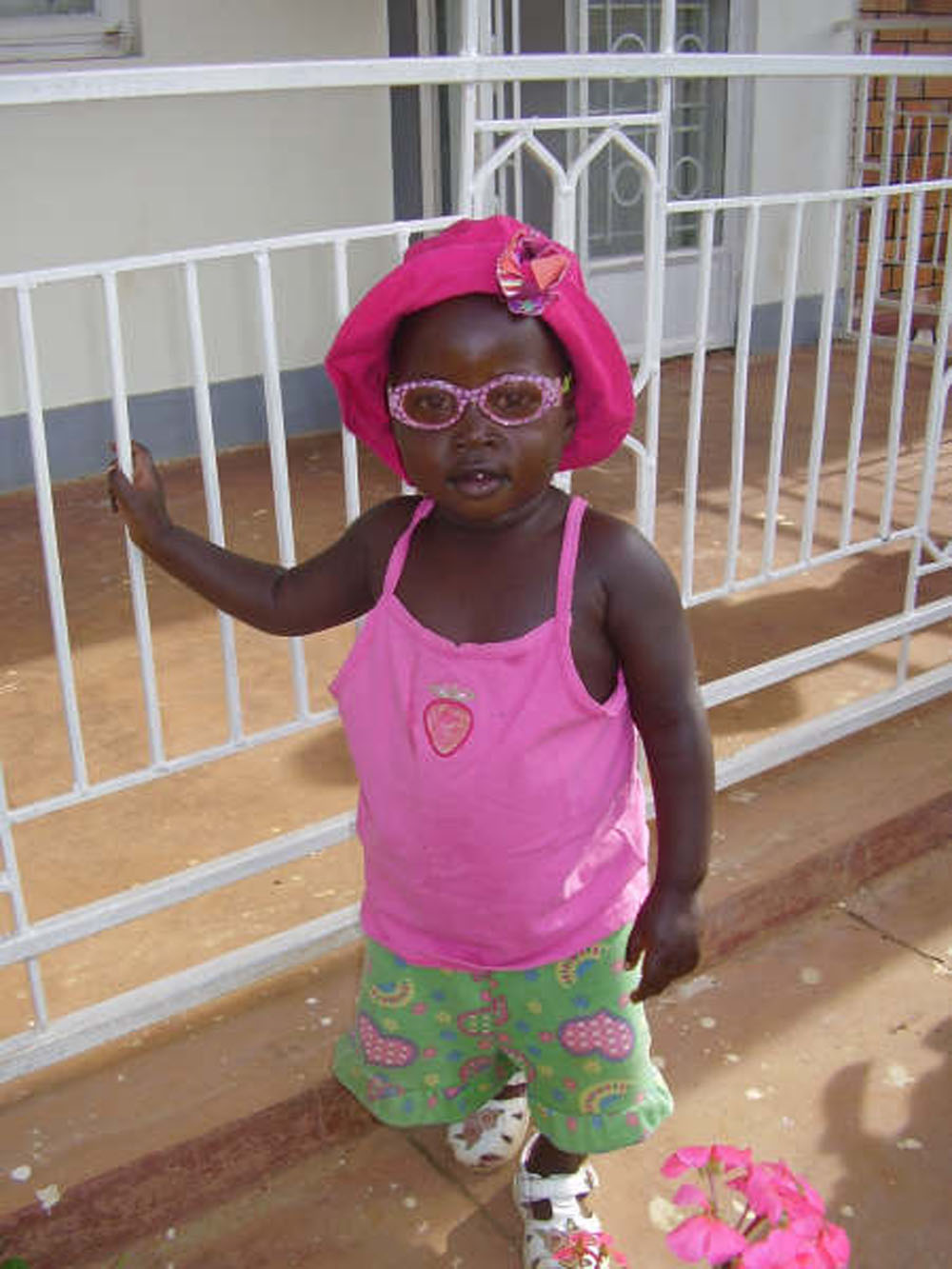 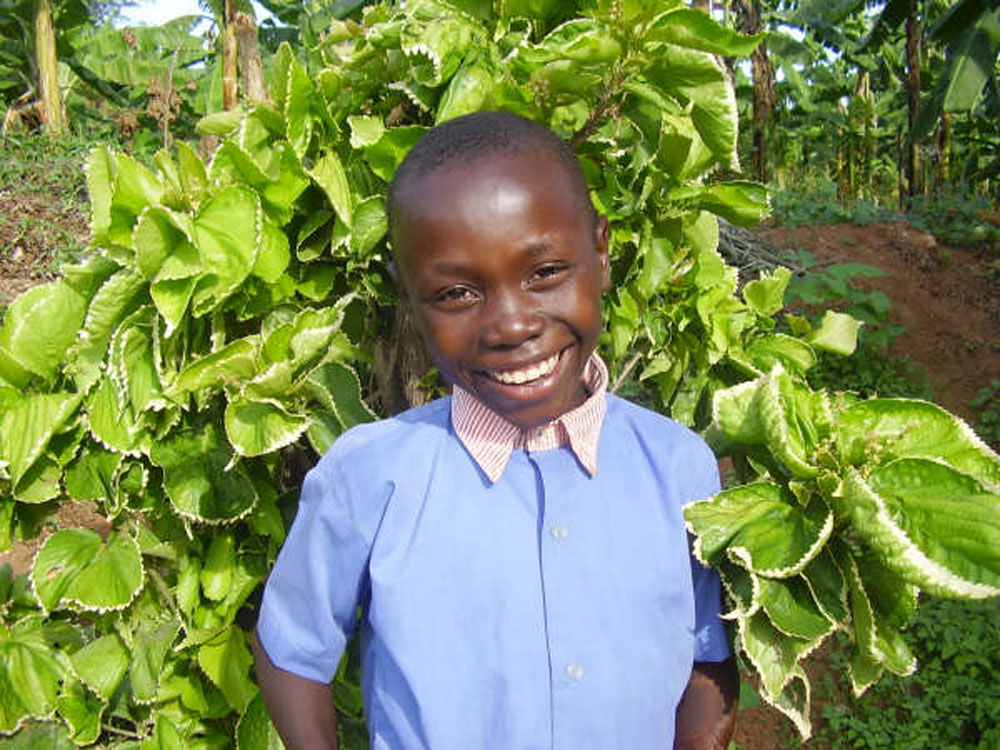 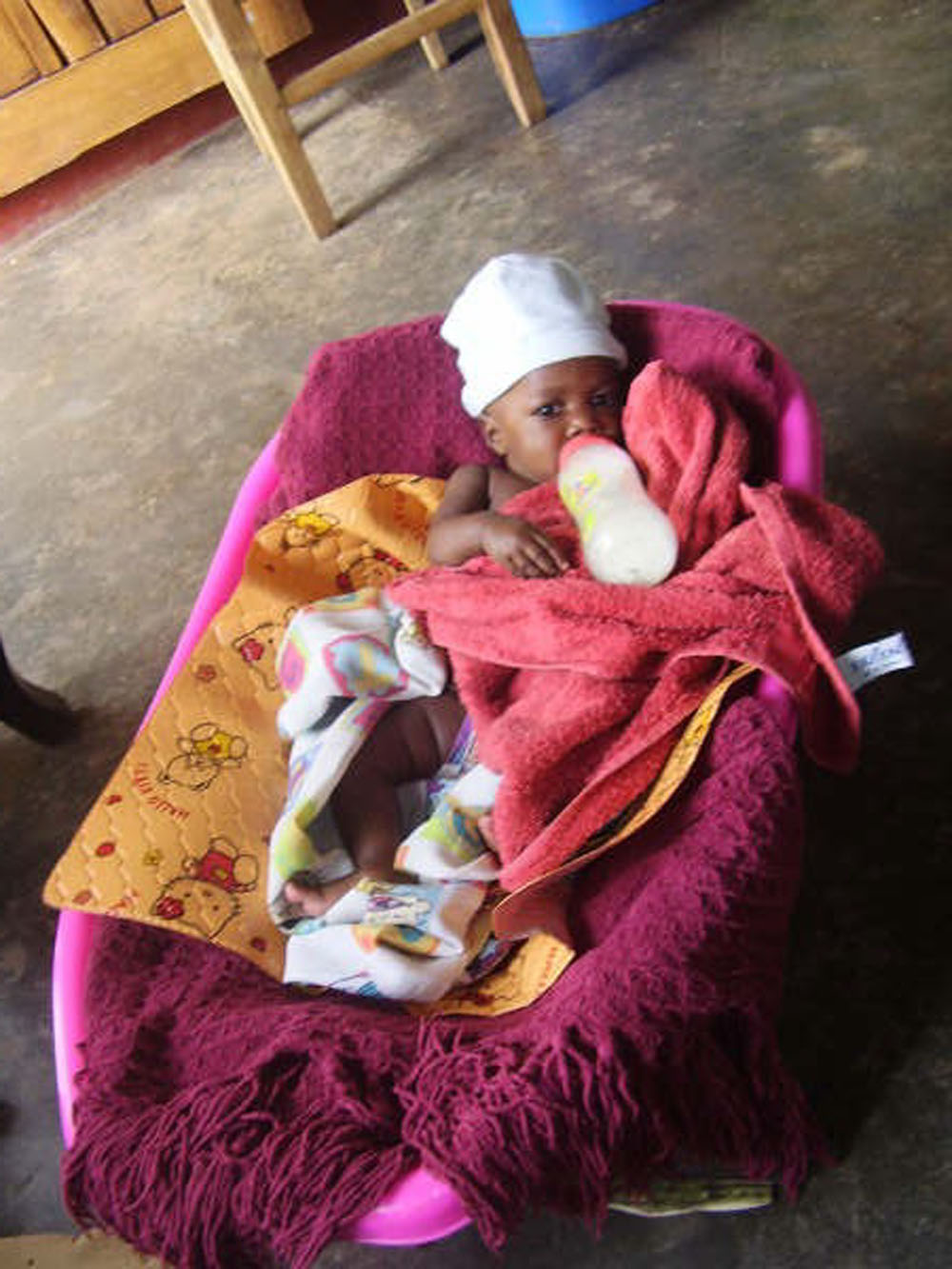 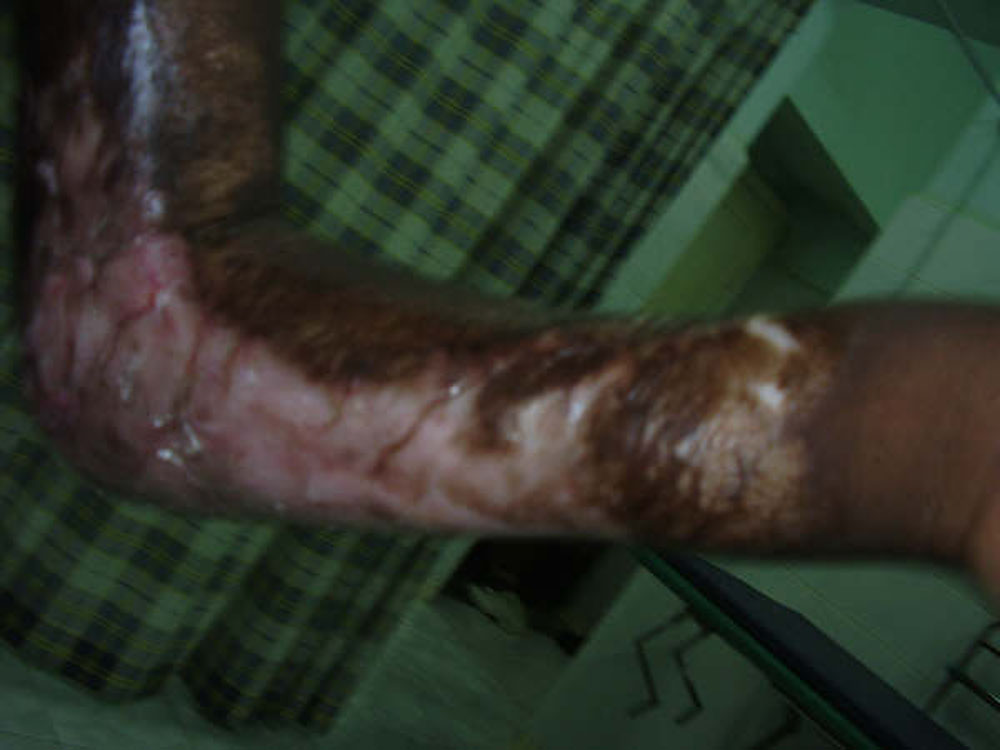 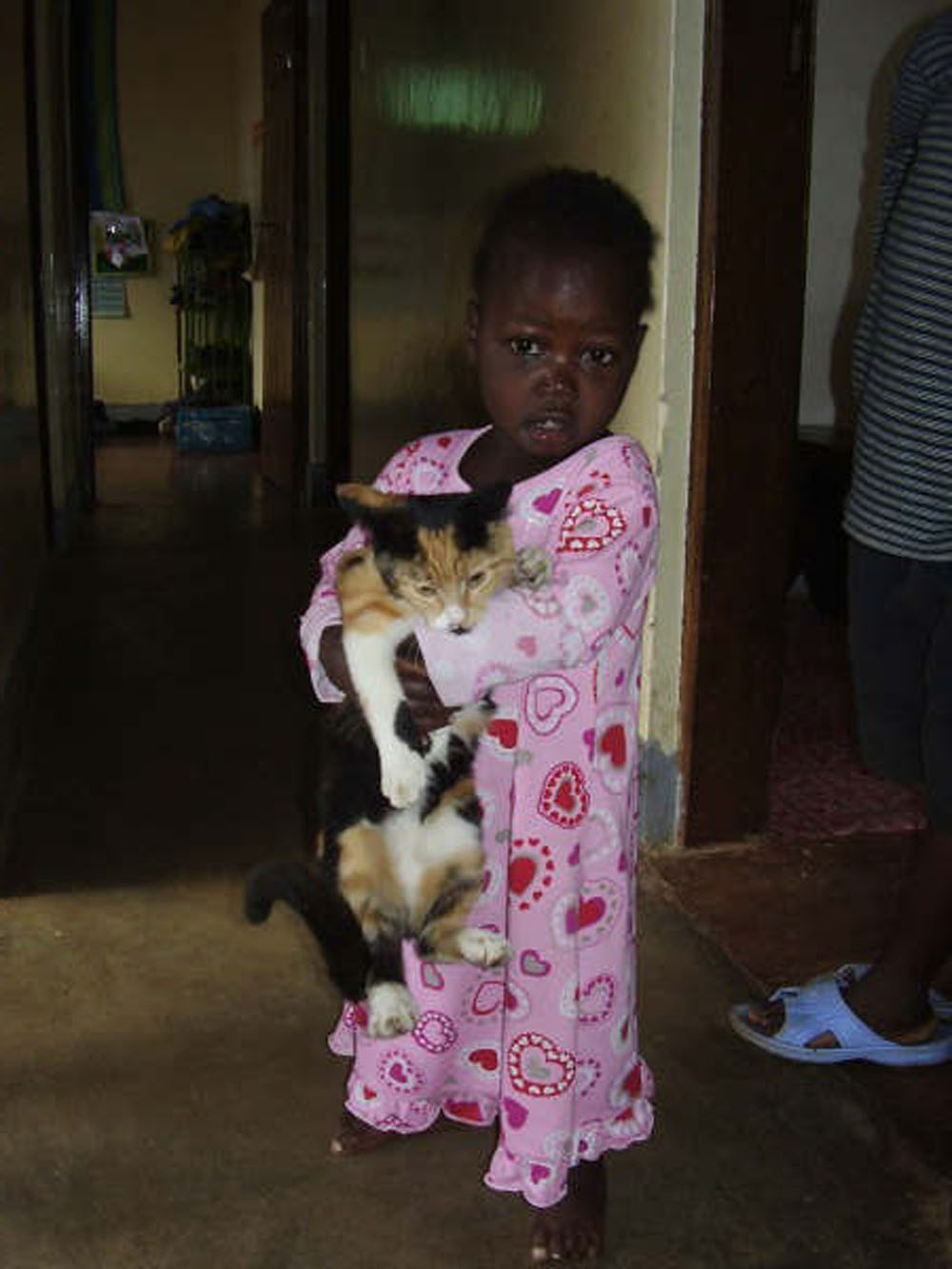 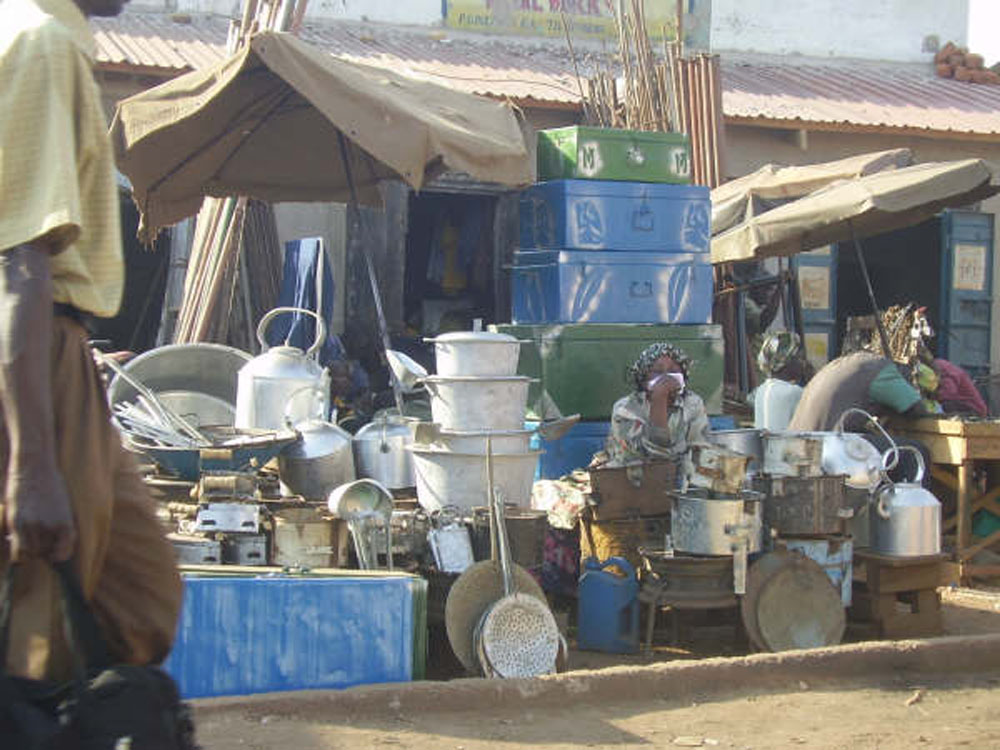 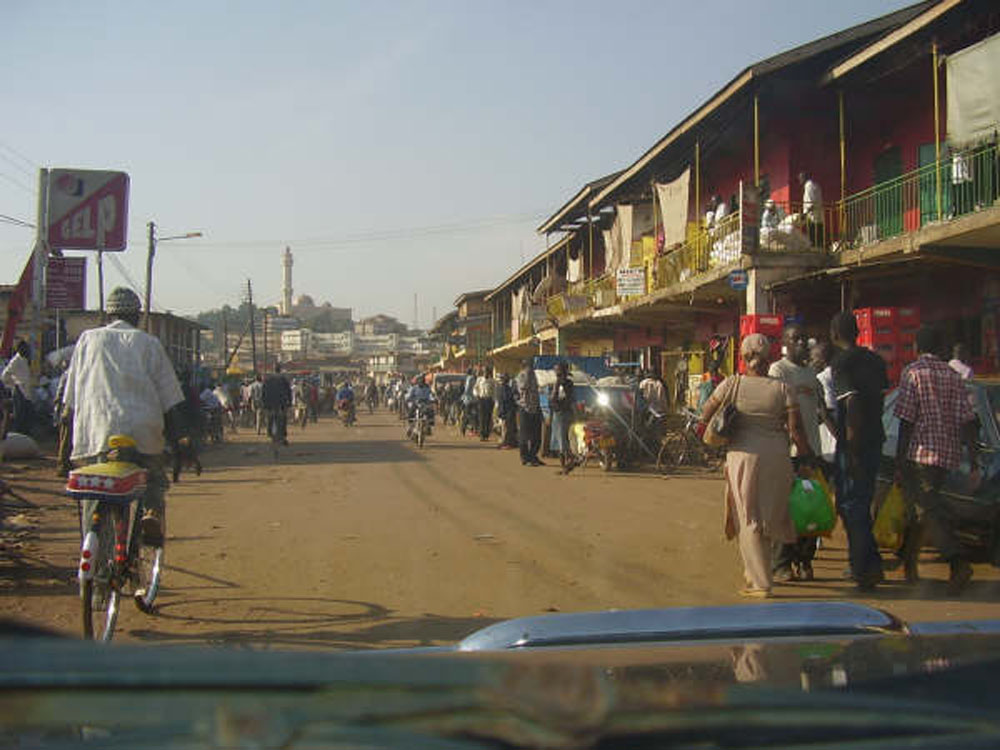 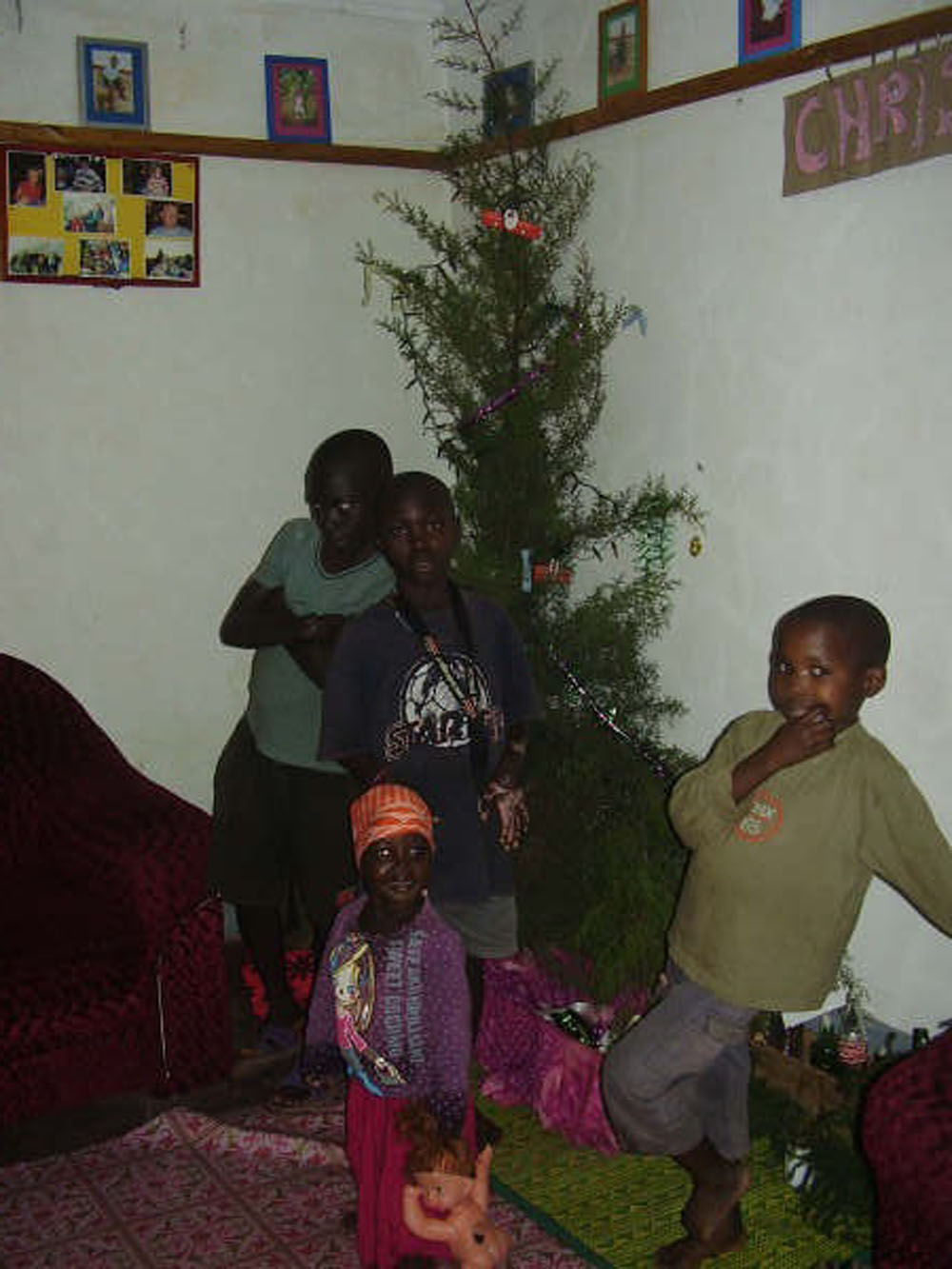